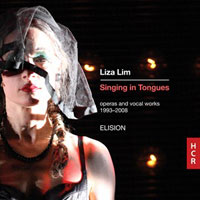 Description: Lim is a Chinese-Australian composer with a long association with the performing group ELISION, described as "Australia’s preeminent new music group" with whom she has worked since they were students together in the 1980s. The works in this set are her most important vocal pieces of the years 1993 to 2008, the first three of her "operas". Her overall style in these works is best described as theatre with voices and instruments; it bears scant resemblance to conventional opera, though stories dealing with myth and ritual are a starting point for all of them, but her treatment of them is very different from the narrative approach of the operatic tradition. Her idiom is on the extreme side of the avant garde in many respects - close collaboration with the ensemble has facilitated the development of a vocabulary of distortion and “beautiful noise” through a wealth of extended techniques (both instrumental and vocal) and sounds. There is a clear evolution of style throughout these pieces, the first, The Oresteia of 1993, being the most extreme both in its detachment from narrative form and its technical resources. Rather than retell the bloodthirsty and violent story, its principal characters (including the Furies) are invited to manifest on stage, their nightmarish inner landscape fully on display. After sections with revealing titles like "Memory spills from the split skulls of Clytemnestra and Agamemnon", the work ends with a section titled "Athena's Trumpet", a duo between virtuosic - but more or less conventionally played - trumpet and voice, which may recall the "Michael" trumpet music emerging from the tumult of Stockhausen’s Donnerstag. 2008's The Navigator is at once more abstract in concept, there being no attempt to depict characters, just mythic archetypes from Tristan and Isolde and The Mahabharata, and themes of ecstatic and erotic transformation, and more concrete and structured (and probably to some, more satisfying in musical terms) in sonic expression. Unusual instrumental sounds (both from unconventional members of the ensemble (contrabass recorder and electric guitar in this piece) and a wide array of extended techniques are both present, but both here and in the song cycle Mother Tongue (2005) the composer allows herself to dwell on some truly stunning sonoristic effects and textures, leading to a greater sense of musical continuity, and commensurately heightened dramatic impact. 3 CDs. Many varied performers. Disc 1 originally released by Dischi Recordi in 1994.