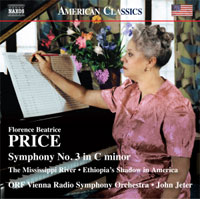 Description: Who’d have thought 25 years ago that two recordings of Florence Price’s Third Symphony would come out within a couple of months of each other AND that one would be on Deutsche Grammophon AND that neither would be a first recording? As we said when the first recording came out in 2001: “The symphony surely would have delighted Dvorák, dating from 1940 and a conscious attempt to represent "a cross-section of present-day Negro life and thought with its heritage of that which is past..." Laid out in the classic four-movement form, it is rich in beautiful (original) melodies with a tinge of French Impressionism in the orchestration, jazz and Latin American dance forms and, in its scherzo, Juba Dance, characteristic antebellum African-American dance rhythms”. The premiere recording here is of 1934’s Ethiopia’s Shadow in America, a 13-minute suite of three movements which has a descriptive accompanying narrative tracing the experience of African slaves in the United States. ORF Vienna Radio Symphony Orchestra; John Jeter.