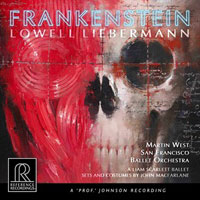 Description: This is the first audio recording of Liebermann's hugely impressive, sumptuous ballet score to accompany Liam Scarlett's choreography after Mary Shelley's gothic novel, previously only available on DVD (03S076) in a performance from the Royal Opera House, released five years ago. Liebermann captures the grandeur and emotional resonances of the story in his neo-romantic, tonal music, combining narrative drama with impeccable musical structure and argument. The composer says that his "… intention [was] that the music of each act would function as an unbroken symphonic span with a musical flow and logic that could stand on its own, independent of the story or stage action" - and it does, most impressively so. The music does indeed have a continuous, quasi-symphonic sense of direction, leading the audience through the lengthy, detailed narrative and compressing the subjective time it takes. The score is varied, within its tonal idiom; the macabrely humorous dissection lecture scene (in passacaglia form), or the raucous burlesque tavern interlude that follows are more than a little reminiscent of Shostakovich, a composer not infrequently evoked in Liebermann's output; ballroom scenes and romantic pas de deux emulate classical and romantic models from Mozart to Tchaikovsky; the Busoni of Doktor Faust is evoked in the introduction to act 2. It is not so much that Liebermann sounds like any particular Romantic composer or an amalgam of identifiable characteristics of any of them, as that he wholeheartedly belongs to that tradition and has never felt moved to abandon it. A powerful and compelling work in every way, with or without the stage action. 2 CDs. San Francisco Ballet Orchestra; Martin West.