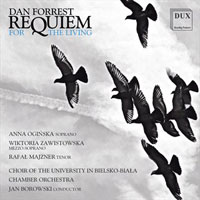 Description: Forrest is known for his accessible and beautiful choral works, expertly written to appeal to a wide range of performers and listeners. His idiom is thoroughly tonal and neo-romantic, effortlessly melodic, harmonically rich and sensitive to the cadences and nuances of his texts. This is a requiem of consolation for those left behind, and thus avoids apocalyptic visions of divine judgment. The closest thing here is the second movement, "All is Vanity" (Ecclesiastes 1:2), strongly rhythmic and threatening, similar to the Sanctus of Karl Jenkins' famous "Armed Man" Mass, (of which we'll be offering a spectacular multimedia performance on DVD next month), a less stylistically consistent work than Forrest's but written to embrace a similar range of popular appeal. The text comprises five short sections from the traditional Latin Requiem Mass, into which are interpolated two fragments, one from the book of Ecclesiastes and one from the book of Job. An imposing, solemn Introit and Kyrie are followed by the agitated Vanitas; a gently consoling Agnus Dei; the Sanctus, a crescendo of hope, warmth, and light; and the final mysterious, radiant Lux æterna and Christ's promise of rest, from the Gospel of St Matthew. Anna Ogińska (soprano), Wiktoria Zawistowska (mezzo), Rafał Majzner (tenor), Choir of the University in Bielsko-Biała Chamber Orchestra; Jan Bororski.