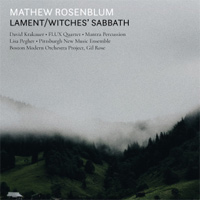 Description: Rosenblum's music draws influences and inspirations from a bewildering variety of sources, but somehow manages to synthesise them into works of coherent and compelling immediacy and communication. Various tuning systems and microtones are an important part of his vocabulary, as are electronic and recorded sounds; but so are the energy of rock music, the rich palette of Romanticism, and the inflections of world and ethnic music. Lament ... Tells the story of the composer's family's journey into exile from Ukraine in 1919, using recordings of Eastern European and Jewish laments and of his grandmother's storytelling. These are blended with orchestral material in two styles; Rosenblum's own, and borrowed fragments from Berlioz, as suggested by the title, symbolising superstition and fear. This unlikely mash-up is presented in the form of an outrageously virtuosic concerto for David Krakauer, whose contribution is klezmer-inflected and includes improvisation and a wildly improbable cadenza. Somehow, this works, and the work is not just approachable but moving and emotionally wrenching. So is Falling, with its recorded component an LP of the poet James Dickey reading his eponymous poem which enlarges upon and comes close to eroticising a marginal newspaper article about a flight attendant who fell to her death from an aircraft. The music has the edgy, incessant momentum of the uncontrolled and inevitable descent, while the recorded and sung text dispassionately traverses the doomed woman's state of being, from panic through acceptance to transformation. Last Round, with its strong rhythmic element, energy, momentum and unorthodox tuning sounds like a particularly appealing piece of Bang on a Can fare, as does Northern Flicker, an exhilarating percussion solo from the wildest dreams of a superhuman jam band drummer.