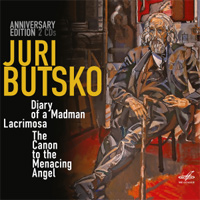 Description: Butsko was a fellow student of Schnittke, but has never achieved the recognition afforded to the well known names of his generation. While being the opposite of an attention-grabbing avant gardiste, he appears to have made no effort to ingratiate himself with the Soviet authorities, but contented himself with following his own artistic path - which ended up in an unusual and rather compelling place, it has to be said - so the story of his neglect, rather than being one of suppression on ethnic or artistic grounds has more in common with a tonal English symphonist during the Glock years at the BBC; the establishment couldn't be bothered with him, nor he with them. Diary of a Madman (after Gogol) is an early work from the 1960s, when Butsko was still a student and decided to try his hand at something large-scale. The work is largely conventional Soviet fare (though the subject matter was not popular), significantly indebted to Shostakovich and the Russian tradition, notably Mussorgsky. Despite the composer's youth, it is remarkably well written for solo protagonist and large orchestra, and similar in style to White Nights (after Dostoyevsky) [05P081]. Shostakovich approved of it and Kondrashin programmed it, in an early success for the composer. It follows the drama of the protagonist's deteriorating psyche closely and sensitively, with pathos, humor and boldness of narrative, telling vocal writing and undeniable mastery of orchestral forces. In his mature style - equally approachable but far more individual - he was heavily influenced by the chant melodies and rituals of the "Old Rite" of the Russian Orthodox church before it was conflated with aspects of Greek Orthodoxy, and this is evident in the other two, much later, works here. Lacrimosa is an extended symphonic movement for strings, dedicated to the Lykov family, Old Believers who went into exile in Siberia and were lost for many decades. The work is an eloquent lament, with an agitated central section; very tonal, quoting an Old Rite hymn. The Canon to the Terrible Angel sets passages from the religious writings of Tsar Ivan "the Terrible", addressed to the Archangel Michael, with elements of praise, supplication and confession. This late (2009) work is most original, with a powerful dramatic arc which accumulates tension and weight as the work progresses. The ensemble part, suggesting bells of every type, increasingly contributes to the texture as the work progresses, pivoting around the powerful central section 'When the Time Comes'. From this point forward, the rich, punctuated a cappella music and chant-derived solo lines of the opening movements take on greater weight and grandeur, leading to a prayerful conclusion. 2 CDs. No texts.