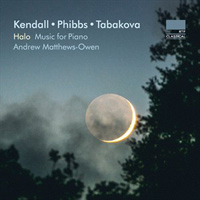 Description: Phibbs' six Preludes, like the fine songs we offered previously (08P084) are works of great character and sensitivity. The first is elegiac, the second fantastic and nocturnal, the third a fleet etude, followed by a calm hymn-like piece, and then a nervous, quasi-minimalistic cityscape, with the title 'Neon'. The final prelude is brief and folklike, in memory of Steven Stucky. Tabakova's Modétudes are, as the title suggests, essays in the modes, combined with the characteristic meters of Bulgarian folk music. Their repeated motifs suggest transcribed folk songs, with an insistent post-minimalist pulse. Her Halo, by contrast, is a study in sonority, pedal effects and harmonics, based on simple tonal material, depicting the luminous phenomenon of the title, while Nocturne is a gently bell-like sequence of chime patterns. Kendall's piece depicts the three sections of a chess game. The first pits strategy against strategy, with contrasting ideas opposing one another in a sequence of gambits and responses. 'Middlegame' explores patterns and intervals as the game plays itself out and pieces disappear from the board, and the calm, resigned 'Coda' winds the game down as the losing player resignedly moves the pieces by rote, accepting the inevitable. Andrew Matthews-Owen (piano).