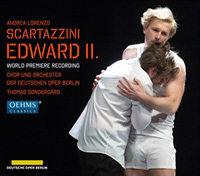 Description: Scartazzini's opera, to a libretto by Thomas Jonigk, summarises the story of one of the most unsatisfactory English kings ever. Based on Christopher Marlowe's play, other near-contemporary sources and aspects of Derek Jarman's film, the opera examines the intense relationships between the pleasure-loving king, tormented by premonitions of violence due to his homosexuality and utterly uninterested in statecraft, his lover Gaveston, his spurned wife Isabella and the scheming Mortimer, all played out against the backdrop of a society entirely without tolerance. Scartazzini's score is powerfully dramatic and theatrical, as we noted in his Der Sandmann (11S078), and traverses a wide terrain of modern idioms. This is even more true of this work, due in no small part to the addition of an important electronic part, spatially diffused to contribute to the immersive, disorienting quality of the nightmare scenes in which Edward is haunted by violent dreams of persecution and murder. The passions and frustrations, and constant danger, experienced by the principal characters, are portrayed in music of violence, intensity and extreme dissonance; the rare occasions on which the textures thin out are mere pauses filled with foreboding of what is to follow. The idiomatic eclecticism and unremitting tension between characters and in the music suggests nothing so much as an updated idiom derived from that of Die Soldaten, which might be a direct antecedent of Scartazzini's style. By the final scene of the king's grisly murder, to which is appended an ambiguous redemption (different from that superimposed on the story by Jarman), the listener is likely to feel shattered and, as the postlude suggests, mightily relieved that we live in so much more tolerant a time, in which such social and political intrigues and such violent bigotry could never possibly happen again. 2 CDs. German libretto. Michael Nagy (baritone), Agneta Eichenholz (soprano), Ladislav Elgr (tenor), Andrew Harris (bass), Chorus and Orchestra of the Deutsche Oper Berlin; Thomas Søndergård.