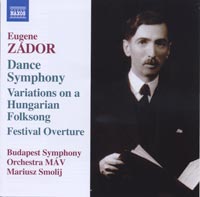 Description: The third disc in this ongoing series of music by Zádor, friend of Bartók, refugee from Nazi Austria, exclusive orchestrator for Miklós Rózsa’s film scores after landing in Hollywood, brings the early but ample Variations of 1919 which last half an hour and contain pages and pages of wonderful orchestral color, at times approaching Richard Strauss in opulence. The symphony (1936 and premiered by Knappertsbusch) is of the same length, in four movements, and is dressed in the most luxurious Viennese orchestral raiment, festive and dance-like almost throughout (the slowest movement is a waltz) with moments that recall Korngold. The bravura Festival Overture (1963) was selected by Zubin Mehta as the curtain-raiser for the first week of concerts in the Dorothy Chandler Pavilion by the Los Angeles Philharmonic in December of 1964. Budapest Symphony Orchestra MÁV; Mariusz Smolij.