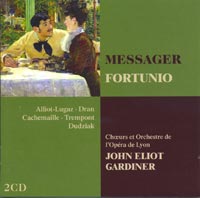 Description: This is not an operetta (if you only know Messager's stage works via Véronique, although Offenbach later wrote an operetta based on the same play by Alfred de Musset which provided Fortunio's libretto); two of its male roles were taken in its premiere (1907) by the original Pelléas and Golaud. A compact piece with each act around half an hour long, it's light and sentimental (the story is based on a decoy for a love affair a married woman is having with a soldier) with vocal lines floated above lovely, chamber-like textures in the orchestration. 2 CDs. No libretto; very detailed synopsis in place of any actual notes. Thierry Dran (tenor), Colete Alliot-Lugaz (soprano), Gilles Cachemaille (baritone), Lyon Opera Chorus and Orchestra; John Eliot Gardiner. Original 1988 Erato release.