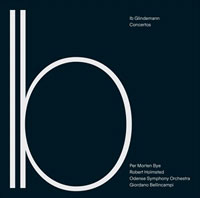 Description: Glindemann was a hugely successful big band jazz leader and composer, a central figure in the worlds of Danish jazz and broadcast music since the 1950s: to co-opt an old cliché, if you look up "Danish big band" in the dictionary, there’s Glindemann's picture. Anyway, these two hugely appealing concerti arose from his desire to be a "serious" composer as well, something that as a conservatory-trained trumpeter and a highly skilled and versatile musician he was certainly qualified to achieve. He was disappointed by the patronizing reception given to his Symphony in 1962, the year of the exhilarating Trumpet Concerto, which was, however, well received; it is clear that his forte is music for entertainment and enjoyment rather than profundity. The Concerto is a genuine, and successful, attempt to write a concert piece in traditional form and with appropriate virtuoso intent. The composer can’t quite escape his big band background, but this is not by any means a "crossover" piece; the first movement announces itself after a brief introduction with a gesture amusingly reminiscent of the opening of the scherzo of Beethoven 9, but subsequently the composer seems to be modeling his idea of a classical concerto on something Brandenburgeois, with Romantic "hunting" associations (the showy cadenza is introduced by a full-on jazz chord, though!). The lyrical slow movement is a sentimental ballad, jazz-tinged, and the exuberant finale pulls out all the Spanish clichés from Rimsky's Capriccio onward, complete with strumming pizzicato strings and flamboyant dance rhythms. More than half a century later, the Trombone Concerto finds the composer staying more firmly in the idiom that had served him very well in his professional life; the first movement has the lush warmth of a film score; the orchestration is superbly accomplished - unsurprising in view of Glindemann's work as arranger and orchestrator - and the soloist is provided with a demanding, fully concerto-worthy part. The slow movement is Gershwinesque, with elements of Hollywood film composers like Steiner, Tiomkin, or Waxman. The ebullient finale combines circus galop, big band, and film music to bring the piece to a rousing conclusion. The Medley is a suite of four numbers from the composer’s film output, and here his skill in programmatic scene-setting, sensual jazz moods, and strutting band marching music are brought to the fore. Per Morten Bye (trumpet), Robert Holmstead (trombone), Odense Symphony Orchestra.