JESPER KOCH (b.1967): Dreamscapes for Cello and Orchestra, Arcadia Lost for Violin and Orchestra, Lonesome for Clarinet, Strings, Harp and Percussion. 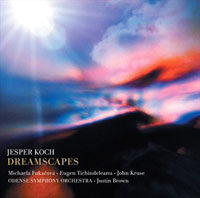 Description: Koch's idiom is neo-Romantic and very tonal, with an emphasis on melody and lyricism. Dreams, nostalgia and the escape into worlds of the mind are recurring themes in his music. The substantial three-movement Cello Concerto deals with different kinds of dreamscapes; the opening movement inhabits a magical world of day-dreaming, the eloquent, long-breathed solo part only briefly disturbed by the orchestra's intrusive attempt to reintroduce 'real life'. The slow movement is a tender lullaby, again interrupted and this time reaching a powerful climax with a sense of conflict, resolved by the calm alliance of an off-stage flugelhorn with the cello, which helps to restore order. The ambitious finale is an Hungarian fantasia, partly in homage to the dancelike 'Hungarian gypsy' finales in the Romantic tradition, and partly in tribute to Ligeti, who died while Koch was working on the concerto, though both the lively folk elements and the reflective passages are more influenced by Bartók. Arcadia Lost is in every way the epitome of the re-imagined Romantic concerto, beginning with its inspiration, Shelley's rich evocation of Venice, with its sinister overtones of insanity, thwarted love and lost creativity, Julian and Maddalo. The work is more dramatic than the dreamy cello concerto, the first movement shadowy and haunted, vividly pictorial and with a sense of mounting narrative tension; the second is a nocturne, full of evanescent ghostly visions, and the third is a pastorale, welcoming the new day. The clarinet concerto Lonesome is a set of variations on a lovely, melancholy theme. The work is wistful and sad, but not morbid or monochrome; there is a good deal of emotional variety, as the clarinet, which plays almost continuously throughout, makes a few attempts to amuse itself with no companions (it is the only wind instrument on stage) in some slightly frantic, upbeat variations, but in the end the mood of resignation wins out. Michaela Fukačová (cello), Eugen Tichindeleanu violin), John Kruse (clarinet), Odense Symphony Orchestra; Justin Brown.