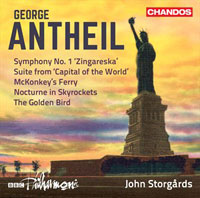 Description: Under Ernest Bloch’s tutelage, Antheil quickly fulfilled his ambition to write a symphony (1921-22) inspired by the New Jersey milieu in which he had grown up: this marked a deliberate abandonment of academic compositional techniques in favor of music driven by emotional and atmospheric stimuli. Capital of the World is based on a 1936 Hemingway short story entitled “The Horns of the Bull,” which tells the tale of a young Spanish boy who works as a waiter in a hotel in Madrid, but dreams of becoming a matador. Ten minutes of first recordings: the 1921 Golden Bird, a piece of Chinoiserie originally for piano and the 1951 Nocturne whose title suggests the fireworks to occur soon after its NBC radio premiere on July 1. BBC Philharmonic; John Storgårds.