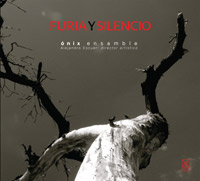 Description: The Mexican pieces all relate in some way to Mexico's turbulent history and current unsettled state. Halka's piece "[take] the lands by force" was commissioned for the centenary of the Mexican Revolution. Ferociously energetic, the outer sections are aggressive and wildly celebratory, while mournful songlike passages lament and soothe. The work draws on Mexican melodic and rhythmic characteristics in a very tonal idiom. Lara's piece refers to a poem by Idea Vilariño about the disappearance of beauty - light, the sun - in a chromatic idiom and glowing instrumental colors. As the title suggests, Contreras' neo-romantic, highly emotional work refers specifically to the troubles caused by the violence in Ciudad Juárez. The first movement is a heartbroken lament for the victims, the second a sarcastic setting of a naive folk tune of the type co-opted to praise drug lords, brutally interrupted by violent outbursts. The third movement evokes a solemn Mass for the victims, with tolling bells, chanted prayers and sad, melodic eulogies. The finale is aggressive and strongly rhythmic, much like the Halka, interspersed with passages of lyrical remembrance. Currier's Static fits the mood, if not the theme, of the programme, in six varied movements - Remote, Ethereal, Bipolar, Resonant, Charged and Floating - that alternate withdrawn stillness and fury in an inventive and imaginative, thoroughly approachable idiom. Ónix Ensemble.