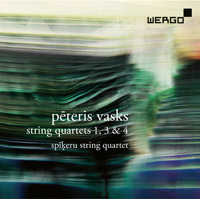 Description: The 4th quartet (1999) is quintessential Vasks, very much the kind of thing for which he is most known, and containing examples of his most characteristic traits. The first movement is a largely consonant, nostalgic elegy for peaceful times; the central chorale a pained, chromatic lament for the 20th century's violence. Bracketing the chorale are two intense, vigorous toccatas, very reminiscent of Shostakovih in their motoric onrush and stabbing chords. The final 'meditation' is 'new spirituality' at its finest, an expansive, consoling line of endless melody which Vasks transcribed for violin and orchestra as 'Lonely Angel' in 2006 (06N088). The 1st, by contrast, was originally written in 1977, when the composer was more a part of the mainstream of contemporary music. The protesting first movement has a level of sonorism and dissonance that one more readily associates with Penderecki. The middle movement is an aggressive toccata, far less tonal than those in the 4th; a solemn chorale and extended cantilena passage for the cello hint at the composer's later style, as does the last movement with its shifting strands of intertwining melody. The 3rd, from 1995, is associated with themes of Christmas - sacred and celebratory in peasant style - in textures of somber beauty, consonant harmony disturbed but never destroyed by chromatic undercurrents, and a pervasive sense of melancholy which constantly tends to resolve into optimism based on the continuation of the spiritual and natural worlds; evocations of nature sounds, birds, folk music and church chorales. Spīkeru String Quartet.