ROBERT RUSSELL BENNETT (1894-1981): Suite of Old American Dances, Down to the Sea in Ships from the TV film Project 20, 4 Preludes, Symphonic Songs, Autobiography. 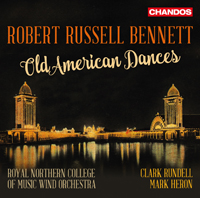 Description: Bennett is best known for his orchestrations for 300-plus musicals between 1920 and 1975, working alongside the great songwriters of ‘golden age’ Broadway, but he also left over 200 original compositions including 30 for wind band, from which this release is taken. A masterful use of the many colors available in a wind orchestra is everywhere evident in this music which is predominantly sourced from American popular music of the first half of the 20th century. Royal Northern College of Music Wind Orchestra; Clark Rundell, Mark Heron.