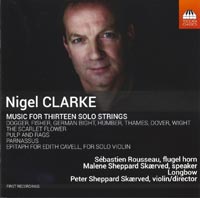 Description: The works on this disc arose from Clarke's ongoing collaboration with Skærved, investigating the expressive potential of a small group of solo strings. Their first project was Parnassus, from the 1980s, which owes much to the divided ensemble micropolyphony of Penderecki and Ligeti. The work experiments with sonority, spatialized effects and the integration of solo virtuosity into an ensemble setting. These techniques are then applied to works that are more instantly accessible, with a dramatic or poetic impetus. The Scarlet Flower is a flugelhorn concerto commemorating Edith Cavell, the British nurse executed by the Germans in WWI, with an eloquent, virtuosic solo part structured according to Martin Westlake's poem on the subject. Dogger... (The title taken from the Met. Office shipping forecast, but you have to be a Brit to know that) and Pulp... are based on poetry evoking the town of Dover, England, with its long history and wartime associations, linked by pre-recorded local sounds and sound effects produced by the musicians to Clarke's music, which abounds in references to other music with maritime associations in the one case, and catchily emulates the machine rhythms of Dover's defunct paper mill in the other. Longbow; Peter Sheppard Skærved (violin).