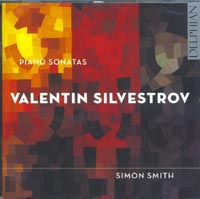 Description: Silvestrov was a master of musical ambiguity - and still is, though when the Soviet Union still existed in the 1960s and 70s, when all but one of these works were written it was arguably a more necessary skill - and nowhere is this clearer than in his relatively limited output for piano. The pieces are all basically tonal, and at first impression they seem to contain a good deal of neo-classical pastiche, but nothing is ever quite what it seems. The Classical Sonata sounds like pastiche Mozart, but keeps making inappropriate modulations or introducing dissonant motifs which then become a little too persistent to be a joke. The fugue subjects in the first and third sonatas are too diffuse and meandering to be readily recognisable as such, yet the fugues are thoroughly and classically worked out, though behind an obscuring veil, as it were. Especially noteworthy is the funhouse mirror game, or twisted puzzle box, that is the Second Sonata. If it expresses nostalgia for the composer's avant-gardism of the 1960s, why does it suddenly start to obsess about a bitonal chord like a dully sonorous bell? Is it an atmospheric, tonal bell piece, but if so, why the extended techniques inside the piano - or are these an evocation of the drones and drums of folk music? Then we have the tuneful, if rather somber, faux-naïveté of Children's Music, reminiscent of Silvestrov's notorious Kitsch Music of 1977. No piece on this disc is 'difficult' to listen to, but all are, to some degree or other, difficult to persuade to yield up their secrets. Simon Smith (piano).