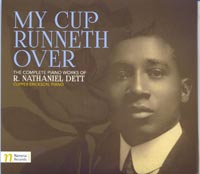 Description: It’s been over 20 years since Denver Oldham’s single-disc release of Dett’s piano music so this complete version (148 minutes in all) completes the picture of the first African-American composer to blend black folk music with the European art music tradition. You’ll find out here that the Negro folk elements in the best-known of Dett’s works, the 1913 suite In the Bottoms, do not characterize his piano works as a whole. There is late Romanticism and even Impressionism in Magnolia (1912) and Liszt and Grieg in Enchantment (1922) and the mystical tone in some movements of the later suites remind us that Dett was a Rosicrucian as well as a Christian whose 1941-43 Bible Vignettes show that his style was still evolving at the end of his life. 2 CDs - midprice. Clipper Erickson (piano).