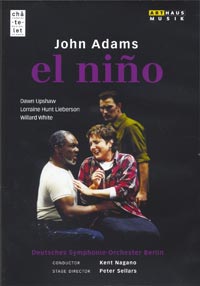 Description: El Niño is an oratorio on the Nativity story, with an added dimension through the addition of poems by contemporary Mexican women poets and other material alongside the traditional New Testament account. This has the effect of shifting the perspective to a less formal, more feminine one, acknowledging the pain, uncertainty and emotional conflict of pregnancy and childbirth alongside the religious significance of the Biblical account. The contemporary significance of the Christmas story is illustrated by a film by Peter Sellars and Yreina D. Cervantez, set in the Hispanic community of California, projected throughout the performance. Adams' music, while retaining the pulsing momentum that characterized the early minimalist works, with the repeated cells covering a wide range of register that were always a trademark of the composer, has more recently emphasized the role of the long, eloquent melodic line. Rich chordal textures and the emergence of this neo-romantic sound produce a kind of hybrid idiom a good deal less hard-edged and mechanistic than strict minimalist techniques typically produce. Climactic tutti are powerful and viscerally thrilling, but much of the emotional weight of the work is carried by the soaring solo vocal lines, with rippling patterning in an accompanimental role, and some a capella or lightly accompanied choral passages have a delicacy and restraint not typical of minimalism. It is the staging, with the accompanying film, that emphasizes the contemporary parallels being drawn with the nativity story, making it an equal part of the narrative. It could be argued that having appreciated the significance of the interpolated contemporary poems, the rather limited stage action and the intermittent cuts to the film don't add much to Adams' powerful score. So, if you already have the audio recording of this production, you may not need this reissue, but if you don't, then this is the cheapest and most convenient way to add what is certainly one of Adams' major works to your collection. Live from the Théâtre Musical de Paris - Châtelet, 2000. Dawn Upshaw (soprano), Lorraine Hunt Lieberson (mezzo), Willard White (bass), Deutsches Symphonie-Orchester Berlin; Kent Nagano. 16:9 widescreen. PSC Stereo or Dolby Digital 5.0, All regions. 119 min. + 28 min. "making of".