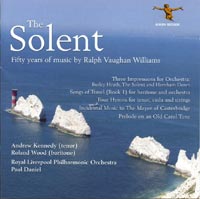 Description: Just over half an hour of unrecorded VW here! The Impressions are Burley Heath, The Solent (both 1902-03) and Harnham Down (1904-07). The first has just a trace of folk-song influence, remaining more influenced by Brahms and with some ideas later used in A London Symphony; The Solent has a haunting opening melody later used in the first movement of A Sea Symphony, the suite The England of Elizabeth and in the second movement of the Symphony No. 9 while Harnham Down manages to be both Wagnerian and English Pastoral. The seven minutes of incidental music for a 1951 radio production of Hardy's Casterbridge are presented along with Weyhill Fair and the Prelude on an Old Carol Tune, both of which contain music used for this production. Texts included. Roland Wood (baritone), Andrew Kennedy (tenor), Nicholas Bootiman (viola), Royal Liverpool Philharmonic Orchestra; Paul Daniel.