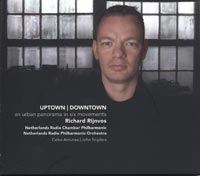 Description: Each of these works consists of three "movements", each of which could be performed separately, and also can exist as a single, 65-minute long piece called Uptown/Downtown. Born of the composer's fascination with Manhattan's "precarious equilbrium between chaos and order", all six pieces are packed with momentum and big, muscular, orchestral power, percussion often to the fore. This goes especially for the Dances which are named after the squares Washington, Times and Union. The NYConcerto's movements, "Grand Central Dance", "Central Dance in the Park" and "'cross Broadway", are inspired by and briefly infused with the music of, respectively, Gershwin, Ives and Theolonious Monk. This is highly entertaining but, do not think that it's insipid, mass-audience pap; it's music for adults. John Snijders (piano), Netherlands Radio Philharmonic Orchestra; Celso Antunes.