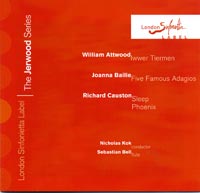 Description: Attwood's work - 'Above Towers' - is based on poetry by Mosel-Fränkisch poet Jean-Louis Kieffer, described by the composer as "full of sudden turns: images of soaring flight and abrupt changes of scenery". This accurately characterizes the music as well; shafts of brass sonority suggest vertiginous landscapes; fragmentary mutterings punctuated by distorted reminiscences of forgotten folkmusic hint at places half-remembered or glimpsed form far away through obscuring cloud. Bailie extracted pitch material from recordings of slow movements by Bach, which is presented in increasingly complex and abstract overlapping strata of slow-moving textured sound. Causton's Phoenix weaves ragged webs of clustered textures fro the sustaining instruments of the ensemble, while the piano, in a contrasting quasi-concertante role, interjects blocks of chordal material, before a final propulsive section brings the work to an emphatic close. Sleep is a short lyrical flute piece played by, and included in memory of, Sebastian Bell, a founder member of the Sinfonietta who died in 2007.