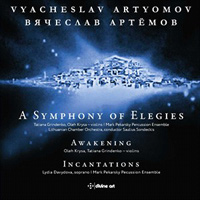 Description: The Symphony of Elegies was written in 1977 (during the Brezhnev years, remarkably, given its modernity), and thus considerably predates his tetralogy "Symphony of the Way" (11S069, 11S070, 07U061). It was composed rapidly during a visit to Armenia, one of the earliest countries to officially embrace Christianity, which made a deep impression on the profoundly spiritual composer for whom the work seems to represent something of a watershed in his compositional intent. The symphony has very little that is conventionally 'symphonic' about it; its three extended movements (the whole lasts 3/4 of an hour) are all very slow and consist mostly of amorphous string textures, often shifting and overlapping in planes of dissonant intervals and clusters, with no development. Fully seven minutes into the first elegy, little commenting phrases start to emerge from the violins, which thereafter assume the rôle of angelic observers, disengaged from the rest of the music. Bell sounds intermittently punctuate the first two movements; chimes, bells and gongs stand out in relief against the textured background of the third. Finally, the celestial matter of this movement gradually accretes into a climax of cosmological or spiritual creation, the entire work, unique in Artyomov's output and highly unusual by anybody's standards, having led up to this moment. Awakenings was written soon after, as a kind of post-script to the symphony. It follows a similar trajectory to the symphony, curiously, on a much smaller scale, though the textures Artyomov draws from two violins may make you wonder whether you're listening to a larger group. It would not be fanciful to see this analogous 'awakening' on a more human scale; that of Adam and Eve, perhaps, after their pre-creation 'sleep'. Incantations evokes a savage, primeval world of natural forces and mysterious rituals. It was described by Schnittke thus: "Artyomov has recreated a strikingly realistic and vivid sound image of primeval magic ... the composer seems to recall archaic invocatory rhythms and witchcraft of pre- musical magic rites, dormant in his blood.” Increasingly rhythmic drumming and chanting accompany the soprano's 'artificial' text of meaningless syllables.