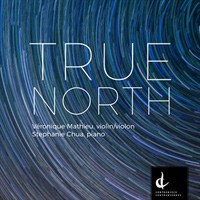 Description: A varied programme of recent, or fairly recent Canadian violin music, the exception being Willan's fine, thoroughly neo-romantic three-movement Sonata (1916, rev. 1955). This is twice the length of anything else here, and alone justifies purchase of the disc, at least for collectors who like conservative but entirely convincing nineteenth-century works written a few decades outside their time. Scime's Gradual Erasures is shockingly modern by comparison; two movements inspired by an in memoriam poem, the first active and dissonant, the second withdrawn and lamenting. Harman incorporates field recordings made on the shores of Lake Ontario. The music provides an atmospheric soundtrack to the sounds of footsteps on the sand, and of waves, producing an evocative soundscape. The remaining pieces are tonal; Molinari's elegant little waltz-like Danza is the first of Three Pieces, suggesting that the other two would be well worth hearing. Schmidt's Adagio is a free-form, darkly lamenting fantasia, and at the opposite end of the emotional spectrum, Ho's Éxtasis is a rhapsodic and capricious virtuosic showpiece. Véronique Mathieu (violin), Stephanie Chua (piano).