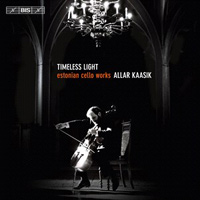 Description: This sample of the broad spectrum of contemporary Estonian cello music, much of it originating in collaboration with this soloist, is both what you'd expect from the part of the world that gave us 'new spirituality' and a good deal more varied than that might suggest. The only piece that bears almost no relation to the 'school of Arvo Pärt' is ... the piece by Arvo Pärt, his early (1966) concerto, which predates the style for which he is best known. Opposing chaos and oppressive mechanistic order, with the individual taking refuge in two brief chorale-like episodes, the piece employs wildly chaotic aleatory and grinding propulsiveness; not the sort of thing we've come to expect of the composer! Everything else here is very tonal, modally and folk-inflected, and instantly accessible. Grigorjeva's Prayer surrounds the solo line with magnificent undulating washes of choral sound, and so does Kõrvits' landscape-music, though he explores a wider range of sonorities and techniques including a chorus of whistling 'birdsong' in his vivid evocation of natural sounds. Tuur's piece is an eloquent and dramatic cello solo with the organ deliberately at a distance, so that the reverberation of the performance space becomes an active participant. The solo pieces explore a range of expressive devices, with many references to the great cello pieces of the past. Allar Kaasik (cello).