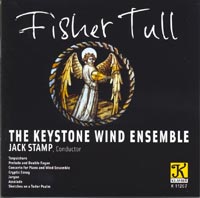 Description: This disc provides a nicely varied portrait of a versatile and creative composer for winds. All the works are firmly grounded in tonality and thoroughly accessible, but each exhibits a different aspect of the composer's personality, from the robust, neo-romantic virtuoso vehicle that is the concerto, with its rhythmic sophistication and adventurous harmonies, via the formal elegance and classical rigor of the Prelude and Double Fugue, to light and lively entertainment pieces, Terpsichore (a vigorous dance as the title suggests) or Accolade (written for young players). Tull's ear for sonority was astute, and all the works contain many felicitous touches of orchestration, for instance the clever percussion writing in the concerto's last movement, or in Jargon, almost a percussion concerto, based on an 18th-century hymn. Tull enjoyed this sort of thing; the Essay is a set of enigmatic variations that hint at a theme heard at the end but ingeniously progressively revealed throughout, a mediæval church melody, while the distinguished and dignified Sketches uses the same Tallis theme on which Vaughan Williams based his Fantasia. Keystone Wind Ensemble; Jack Stamp.