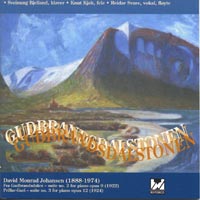 Description: Original and harmonized versions of Norwegian folk-music from the Gudbrandsdalen region due north of Oslo: the composer used folk tune collections as sources for these two piano suites in 1922 and 1924. There are eleven numbers in the former and five in the latter and all are performed in the piano version while also being offered either on fiddle or flute/voice (rarely all three) in a studio recording which seems to have been based on a 1999 folk music festival performance by the same players. I say “seems” since the notes are in Norwegian only and German will only take you so far when reading that language... Sveinung Bjelland (piano), Knut Kjøk (fiddle), Reidar Svare (vocals, flute).