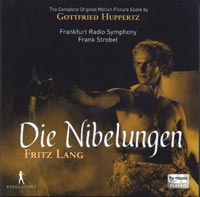 Description: After his score for the famous Fritz Lang film Metropolis (07N104) which this conductor recorded for Capriccio, we now get the truly massive one for Die Nibelungen of 1924 (right after Dr Mabuse der Spieler) and right before Metropolis. No trace of Wagner here except unconsciously, and the screenplay sticks faithfully to the original Norse myth, unlike the librettos of Wagner. Huge orchestra, lush orchestration, leitmotifs used but simply, not elaborately as Huppertz’ compatriots Korngold, Steiner and Waxman would do later in their careers. Every minute of a silent film needed music to magnify and illustrate the scenes on screen and this complete recording totals the exact length of the films: 270 minutes. Notes on the film(s), the composer and the music and an informative interview with the conductor which also touches on the unfortunate Nazi taint the film gained due to its popularity with Hitler (for French and U.S. release, the soundtrack made up of Wagner excerpts which the latter preferred, was attached to the film in place of Huppertz’ score). 4 CDs. Frankfurt Radio Symphony;  Frank Strobel.