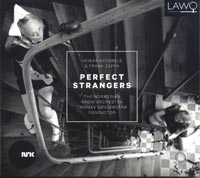 Description: Goebbels' suite is a component of his large work Surrogate Cities, an exploration of the complex, labyrinthine, surreal, often nightmarish character of the modern city. Musically, the work straddles popular culture and postmodern concert music, with some sections featuring largely tonal and motoric or more or less atonal orchestral material, with industrial noises and percussion from the sampler, while others clearly have their roots in techno and electro-pop, with a powerful beat and the kimd of orchestration that certain progressive rock groups have sometimes indulged in in high-concept productions. The whole is far from inaccessible, and might be broadly summed up as a suitable soundtrack for a J.G.Ballard dystopian futurescape (Goebbels's actual literary models include Paul Auster and Heiner Mueller), though classical purists will want to check their preconceptions at the door. Zappa repeatedly returned to the abrupt juxtaposition of 'classical' and 'rock' styles and ensembles throughout his career, and although a 1970s attempt at an orchestral album was a less than happy experience, leading to some nicely crafted invective from the frustrated composer and a musical reaction in the form of the all-synthesizer 'Jazz from Hell', he later relented and toward the end of his life was encouraged by Boulez' advocacy, among others. Since then, orchestral versions of his modern but hardly avant-garde (largely tonal in fact - G-Spot Tornado, a kind of demented bitonal Scots reel over a pounding rock beat, is fairly typical) and by no means unapproachable pieces have been increasingly performed; this selection being a rather appealing sample. Norwegian Radio Orchestra; Thomas Søndergård.