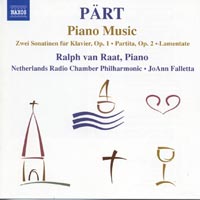 Description: Here's neo-classical, Shostakovichian Pärt (the Sonatinas of 1958 and 1959), atonal Pärt (the Partita from 1959), and some of the first "holy minimalist" stirrings after his five-year silence in the mid-70s (Alina and Arinuschka [1976 and 1977]). Then, there's the massive, 35-minute piano concerto from 2002 which was inspired by a huge sculpture of the Greek mythological figure Marsyas which, besides his now-usual tintinnabulation and moments of quiet intimacy, few in notes, where time stands still, also includes loud, dissonant and percussive passages with ferocious brass and percussion parts which seem to describe the Dionysian side of the ill-fated satyr. Ralph van Raat (piano), Netherlands Radio Chamber Philharmonic;  JoAnn Falletta.