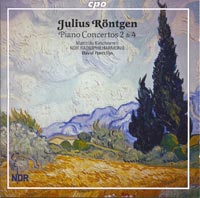 Description: Or, better: the "Schumann/Brahms Piano Concertos Nos. 2 & 2.5". Composed in 1879 and 1906 respectively, these concertos explain why Roentgen was seen by Brahms, Clara Schumann, Herzogenberg, Joachim and other members of the Brahms circle as the "great white hope" against the evil Wagner-Liszt axis in German music. The Second had several performances but by the time Roentgen wrote his Fourth, Mengelberg was not allowing any performances of his music in Amsterdam and not even letting him perform as a piano soloist with the Concertgebouw and it only had one performance in Utrecht (in 1907) until these recordings were made. Matthias Kirschnereit (piano), North German Radio Orchestra Hannover; David Porcelijn.