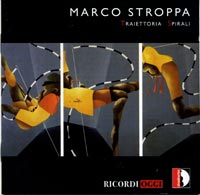 Description: Traiettoria is an ambitious three-movement electroacoustical work, in which the piano is amplified and directly interacts with the electronics, while the latter component is also spatially projected throughout the hall. The piano material is complex and highly virtuosic, but so is the electronic component, which consists entirely of synthesized sounds. S ometimes the piano plays alone for an extended episode; some parts of the piece are for the electronics only; in others, the two play together, the richly varied electronic part forming a kind of substitute for orchestra or ensemble in more traditional concertante works, the two interacting in terms of the exchange of musical ideas (here sometimes meaning purely sonic or timbral material - a piano sound being followed by electronic resonance based on an analysis of its harmonics, for instance, and sometimes meaning material of similar type interlinked between the two sources to produce a kind of hybrid instrument). The amplification of the piano places the listener inside an electronically enlarged instrument, and this approach is also central to Spirali, in which the instruments of the string quartet are spatially projected around the audience in 'virtual spaces' of various sizes and characteristics, while interacting with the equally complex and virtuosic electronic part played by a fifth musician.