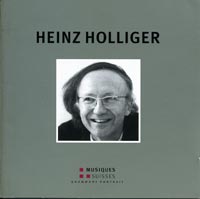 Description: (S)irató, Holliger's lament in memoriam his teacher, Sándor Veress, is a powerful, declamatory work with both a sense of ritual and rage; the large orchestral forces are handled with masterly precision, the percussive climaxes shattering, the flickering cimbalom a constant reminder of the Hungarian connection with Veress. The Stücke, from a decade earlier, betray an interesting approach to harmony and organ sonority; Holliger's organ textures, enhanced by pre-recorded organ material with which the performer interacts in complex counterpoint, are far removed from the mainstream of 20th-century organ music, perhaps a result of his own extensive performing career on an essentially non-harmonic instrument. This may also have influenced the preoccupation with breathing, exploited in Atembogen (arc of breath) in extended techniques that quite literally consist only of breath sounds for lengthy passages. Far more experimental than (S)irató, it nonetheless shares with it a monumental yet intricately detailed quality. The two more recent pieces reflect preoccupations with the facility of music to 'speak'; the viola in Recicanto adopts clearly quasi-spoken vocal inflections throughout; and aleatory, which is explored to an extreme degree in COncErto, made up of 40 separate pieces for various forces, combined according to the direction of the conductor during the performance. The work runs through a bewildering array of textures, not without humor, as many of the individual 'pieces' contain coded messages or tributes to friends. 2 CDs.