JULIUS BURGER (1897-1995): Cello Concerto, Scherzo for Strings, Variations on a Theme of C.P.E. Bach, Stille der Nacht and Legende for Baritone and Orchestra. 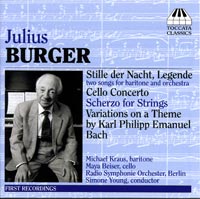 Description: Burger's story will remind you of Berthold Goldschmidt's: escaping the Nazis, finding work in a foreign land, gradually giving up on composition for lack of the possibility of performance (he was assistant conductor at the Met in the 50s among other employments in his long life) and, finally, recognition at a very advanced age. For Burger it happened in 1991 in New York when the Chamber Orchestra of St. Luke's gave an all-Burger concert. He stopped composing around the end of the Second World War; the songs here are from 1919, the concerto from 1938, the scherzo from 1939 and the variations from around 1945. A student of Schreker, his music has his master's influence, along with Korngold, Mahler and Zemlinsky. German-English texts. Maya Beiser (cello), Michael Kraus (baritone), RSO Berlin; Simone Young.