PETER LIEBERSON (1946-2012): The Six Realms for Cello and Orchestra, Songs of Love and Sorrow for Baritone and Orchestra. 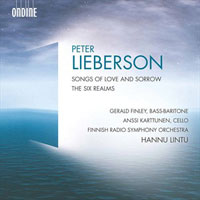 Description: In 2005, Lieberson wrote his song cycle Neruda Songs (07N100) for the love of his life, muse and partner in art, Lorraine Hunt Lieberson. A year after the premiere she succumbed to cancer, and in short order the composer was also diagnosed with the cancer that would kill him four years later. Grieving for his wife and undergoing gruelling chemotherapy, Lieberson revisited Neruda's Sonnets with the idea of writing a companion cycle in her memory, and this became Songs of Love and Sorrow. During his initial period of recovery the composer unexpectedly fell in love again, and it is the nexus between love lost, love regained, and the inevitability of a final farewell that lends this score its heartbreaking poignancy. Indeed, with such profound emotions so eloquently expressed, history may well judge this to be Lieberson's finest work. Neruda's passionate poetry is set to music In Lieberson's generous tonal idiom, an exquisite palette of rich, dark tones and harmonies, predominantly autumnal in mood yet with the widest emotional range. From the opening we are in the world of Das Lied von der Erde, Verklärte Nacht, and, underlined by the important rôle played by a solo cello, the depth and resonance of the Elgar Cello Concerto. The choice of poems charts an arc from awe in the face of the power of infatuation, to the frankly erotic, to a tumult of passions, to the unheralded arrival and rebirth of love, and finally to a heart-wrenching parting, an affirmation of impermanence, the word "adios" repeated again and again. "We're always saying adios every time we close the door," Lieberson said in an interview. "We say goodbye to our lover, adios. We say goodbye to our parents, adios. And one of my teachers said, 'Always smile when you say goodbye, because you never know if it's the last time.'" The cello concerto "The Six Realms" explores themes of the composer’s Buddhist faith, which also informs his response to the flow and cyclicity of love and loss in the song cycle. The six realms are those into which a soul can be reborn on its path to Samsara, or enlightenment. The concerto begins with an ominous and dramatic introductory movement, The Sorrow of the World, a harsh, angular lament for the condition into which the soul has to be reborn again and again. The first movement proper depicts The Hell Realm, a temporary realm of torment (not, of course, eternal damnation), the result of an accumulation of bad karma. It opens with angry, agitated mutterings from the cello, which lead into a series of volcanic outbursts of rage. The furious energy eventually dissipates, and the cello ends the movement quietly and sorrowfully, leading without pause into the yearning, leaden, anguished "Hungry Ghost Realm", where unfulfilled, unsatisfied souls roam, seeking satiety for their unquenchable desires. The Animal Realm, a boisterous, rough scherzo follows, full of activity and unreasoned impulses, somewhat humorous but not exactly enlightened. The cello inhabits The Human Realm mostly unaccompanied, trying to make sense of the consciousness to which better Karma has finally led it. The demigods are next, causing trouble to both humans and gods, in music that veers abruptly between agitated, radiantly magnificent and titanically warlike. This transitions directly into The God Realm, a triumphant, consonant conclusion. Spanish-English texts. Anssi Karttunen (cello), Gerald Finley (bass-baritone), Finnish Radio Symphony Orchestra; Hannu Lintu.