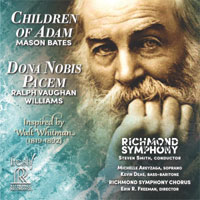 Description: Bates' music is approachable, tonal and neo-Romantic in a way designed to appeal to a wide audience; he has positioned himself as a pioneer in bringing 'classical' and 'non-classical' audiences together without making either feel out of place or unwelcome. Unlike the electronica-infused orchestral works on 03R079 (March 2016) this is not a 'crossover' piece but a big Romantic cantata exuberantly celebrating the idea of creation. His disc-mate here would have found much of his idiom perfectly acceptable; there are even some points of contact that bring the two composers closer than that. The sections of the piece, each exploring a different perspective on the over-arching theme, are separated by choral and orchestral 'Fanfares', exultant proclamations sounding Whitman's "barbaric yawp over the roofs of the world" in his vivid (indeed controversially unambiguous in their time) sensually physical celebrations of spirituality, set to music of irresistible energy and propulsiveness that sometimes recalls John Adams. Two Psalms rejoicing in fruitfulness of all kinds and celebrating God’s bountiful gifts to his people form a joyous, buoyant scherzo. In two settings of Carl Sandburg's ecstatic hymns to the machines and constructions of the Industrial Revolution, Bates, with his fondness for technology and the mechanical beats of electronic music, is in his element. No electronics here, though, just the clangorous rhythms of historically appropriate 'found' percussion, similar to that used in Alternative Energy (03R079). The centerpiece of the cycle is Tolepe Menenak (Turtle Island) from the Mataponi Indians. The music here is mysterious and reverent, in an atmosphere of solemn awe. The Biblical account of the creation from the book of Genesis crowns the work, beginning in the fearful darkness of the void and growing in exultant triumph, which naturally transitions into a final, monumental celebration of life in Whitman's orgasmic, delirious Edenic hymn "To the Garden, the World”. Texts included. Michelle Areyzaga (soprano), Kevin Deas (bass-baritone), Richmond Symphony Chorus, Richmond Symphony; Steven Smith.