ROGER SMALLEY (1943-2015): for Piano: Albumblatt, Barcarolle, Morceau de Concours, 3 Studies in Black and White, Piano Pieces I-V, Capriccio No. 1 for Violin and Piano, Nine Lives - A Song-Cycle about Cats for Soprano and Piano, Lament for the Victims of Natural Disasters for Horn and 4 Tam-tams. 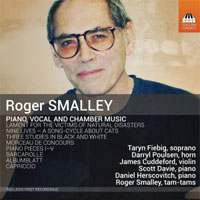 Description: Smalley's output falls into three distinct phases, of which the dramatically different first and third, but not the transitional second, are represented here. The watershed was his large two-piano work Accord (06Q081), to which he assigned the opus number 1, thereby dismissing his earlier works as juvenilia. The early pieces, from the 1950s and â€˜60s are very much of their time, especially the aphoristic Piano Pieces, which suggest the Second Viennese School and Stockhausen. The Capriccio is much larger and more ambitious than the piano works, with a very wide expressive range; largely atonal, it nevertheless combines drama and lyricism in a powerful work that suggests that Smalley could have been a kind of neo-expressionist, had he so chosen. He didn’t, and in the 1980s he embraced tonality, absorbed into his music fragments and styles of the Classical and Romantic composers whom he had always delighted in as performer, and produced marvelous works like the Barcarolle, a transcription of an earlier piece that explores the "often ambivalent, and slightly sinister" nature of the genre in the imagination of composers such as Fauré, Alkan and Busoni. Equally impressive are the substantial Studies from 2002-04 for left hand, right hand and both hands, comprising the powerful and sonorous (and less clichéd than many composers' treatments of the subject) Gamelan, which takes a tragic turn toward the end in memory of the victims of the 2002 bomb attack in Bali; a sparkling Moto perpetuo with a lovely lyrical central section; and Dialogue, which reunites the hands in a sombre, eloquent meditation that fades out as a nursery rhyme. The song cycle is very tonal, and sets nine (of course) poems by diverse poets, which range from whimsical to sinister to genuinely moving (Christina Rossetti's "On the Death of a Cat"). A bonus track features the composer participating in Lament, which shares the theme of the memorial section of Gamelan. Texts included. Taryn Fiebig (soprano), Darryl Poulsen (horn), James Cuddeford (violin), Roger Smalley (tam-tams), Daniel Herscovitch, Scott Davie (piano).