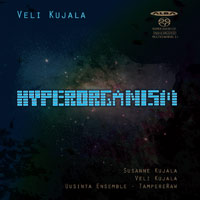 Description: Kujala is an accordionist-composer with a wide repertoire as a virtuoso performer, and a longtime interest in micro-intervals. Somewhat untypical in his æsthetic outlook, then. The organ concerto is in a curious mixture of styles; the first movement is an energetic toccata with a slow, austere introduction for the strings into which the soloist intrudes, eventually galvanising the music into action. The pulsating orchestral accompaniment and the organ's scintillating figuration are clearly tonally based. The rather pretentious booklet note goes on about the cosmos and celestial resonances and so forth, and while it is unclear how closely these ideas are associated by the composer with his music, the sonorous second movement, in shifting planes of amorphous sound in which the electronics play a large role, certainly could have sci-fi connotations and has echoes of early experimentation with synthesizers both within and without the 'contemporary classical' field. The propulsive third movement returns to the vocabulary of the first, with an insistent pulse and tonal (and for a while, middle-Eastern modal) material, with a highly dissonant, cluster-ridden cadenza ushering in the final cadence and echoing sci-fi sound effects. Hyperchromatic Counterpoint is a three-quarter hour suite of seven diverse sections showcasing the composer's virtuosity on a quarter-tone accordion of his own devising. The same curious stylistic variety is evident here as in the concerto; some movements are post-minimalist; tonal, propulsive chord sequences, though here with unexpected quarter-tone modulations. Others are glacially shifting, fluid soundfields of quarter-tone clusters, while the Passacaglia, Part II would be a dignified baroque-style specimen, following conventions that Bach would have been perfectly comfortable with, were it not based on quarter-tone scales, latterly in stratospheric registers. Within these categories there is a good deal of variety; Part 1 section 3 has a jaunty, jazzy, folky feel to its material, which increasingly spins out of control, part IV, after a 'space-age' electronic introduction, suddenly introduces the 'hyperoriental' modalities of the concerto's finale with a lively beat. A pre-recorded electronic part adds sonority or percussive rhythms in some movements. Unconventional and highly individual, and a lot more accessible than one might expect. Susanne Kujala (organ), Uusinta Ensemble-Tampere Raw, Veli Kujala (accordion and programming).