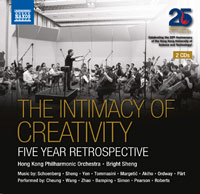 Description: This release is a five-year retrospective of works featured in the enterprising collaborative 'Intimacy of Creativity' program which brings together composers and performers under the guidance of Bright Sheng in the arts program at the Hong Kong University of Science and Technology. Deep Red is a concertante work for marimba and chamber orchestra, in Sheng's familiar modal, neo-romantic idiom. The material, which is put through a variety of transformations in different moods, from meditative and pastoral to vigorously dynamic and boldly dramatic, is a re-working of an early work by the composer which is strongly influenced by Chinese regional folk idioms. The work begins and ends in a gently picturesque mode, rising to an impassioned climax in the middle, as though illustrating some folk-tale of love, adversity and reconciliation set against the limitless landscape of the remote Tibetan province where the composer grew up. Yen's piece is based on her first impressions of urban Hong Kong; piled high with diverse, crowded architecture, teeming with life. The image of a city assembled from a huge pile of Lego blocks is reflected in the music's interlocking rhythmic and melodic phrases, busily active and made up of the bright primary colors of a kind of jazzy post-minimal tonality, lively and appealing. Tommasini drew inspiration from a travel guide to Hong Kong in atmospheric episodes depicting different aspects of the bustling city and its natural surroundings. Persistent pentatonic inflections to the harmony remind us of the location of the landscape in question, and the richly resonant bell-like tone of the marimba is a pleasing foil to the cello's eloquent quasi-vocal commentary. The title of Margetić's piece means 'firefly', and the piece depicts the twilight dance of the luminescent insects in lines of microtonally inflected trills and glissandi over a muted piano accompaniment, all anchored by the basically tonal piano part. The piece doesn't 'do' much, but conjures an atmosphere of nocturnal mystery and scurrying, hypnotic activity most effectively. Akiho wrote 21 (the title refers to a specific bar of Bach, which furnishes the work's material) for Mariel Roberts, whom the composer met at the Bang on a Can Summer Music Festival. Not entirely surprisingly, the strongly rhythmic post-minimal patterning of the piece and its unusual instrumentation for cello and steel pans (supplemented by other percussion) have a very Bang on a Can feel, and the piece would fit right into one of the alternative ensemble's not-quite-classical concerts. Ordway's clarinet quartet begins with a series of rhythmically agitated or lamenting episodes, tonal but rather dissonant and unsettled, which suddenly undergo an incandescent, cathartic climax and subside into a gently introspective coda. 2 CDs. Various Soloists, Hong Kong Philharmonic Orchestra (Sheng, Schoenberg and Pärt); Bright Sheng.