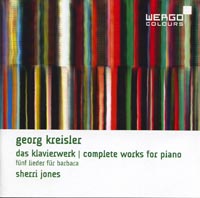 Description: You can't make this stuff up. After his family fled the Nazis in 1938, the seventeen-year-old Kreisler tried to study with Schoenberg, who accepted him as a pupil. However, because he lacked a high school diploma he was not permitted to. So after some years of hack work in Hollywood, he travelled to New York - and embarked on a hugely successful career as a cabaret chansonnier (writing his own material), which he subsequently continued back in his native Vienna. During the New York years he carried on composing in 'classical' style, producing all but one of the vastly accomplished, unapologetically modern (in an early 20th century sense) works here. Echoes of Vienna abound here, and it is clear what attracted him to Schoenberg's circle, though not having been admitted to it, he remained in the is-it-tonal-or-isn't-it? world of, for instance, Schoenberg's Op.11. But Kreisler could also turn in a good waltz - a very tonal, wryly sarcastic one forms the central movement of the substantial sonata, and another, less tonal, more acerbically spiky does so for the five Bagatelles (all from the 1950s); the Klavierstücke, somewhat earlier, are much more tonal, less sardonic in tone, and arguably more instantly accessible. Instrumental virtuosity, at times chaotically polytonal in the later pieces, rubs shoulders with a sarcastic look back at traditional styles - sometimes emphasised by half-quotations. Intriguing music of genuine quality. Olivia Vermeulen (mezzo), Andreas Reiner (violin), Sherri Jones (piano).