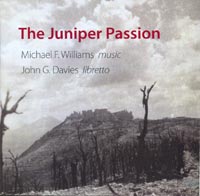 Description: This is a kind of war requiem, cast in the form of an opera with a small cast of archetypal characters and dealing with the events surrounding the battle of Monte Cassino in World War II. John G. Davies' libretto is centered on the wartime events at the Abbey, bracketed by episodes of the New Zealand troops before their deployment, and the resulting bereavements afterwards, and culminating in an extended inquiry into the motivations and conflicts experienced by people in wartime - religious and philosophical arguments and rationalizations, and physical necessity, suffering, and death that result from them. Liturgical texts and excerpts of Nietzsche and Dante are tellingly dove-tailed into the argument, and if country monks, soldiers, their widows and Nazi officers probably never waxed so eloquent in the presentation of their views, well, fishermen don't usually talk like Peter Grimes either, and in both cases, both psychological and operatic needs are well served. Williams' music is unfailingly accessible and emotionally charged, drawing on a wide range of stylistic influences, from plainchant to a sort of romantically melodic minimalism, to a variety of largely tonal, mid-century modernism with distorted allusions to classical models, and throughout, a refined sense of eloquent, lyrical vocal writing. Limited, but well-judged electro-acoustic effects and prerecorded material are used as part of the fabric, for heightened dramatic effect. The musical and narrative dramaturgy are both compelling, and the cumulative emotional impact of the work is considerable. 2 CDs. Libretto included. Pene Pati (tenor), Matthew Landreth, James Ioelu (baritones), Lilia Carpinelli, Julia Booth, Stephani Acraman (sopranos), ad hoc chorus and chamber orchestra; Rachael Griffiths-Hughes.