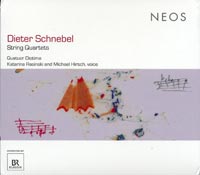 Description: The half-century that elapsed between the tiny, aphoristic, strictest-possible dodecaphonic Webernian Stücke and Im Raum saw Schnebel expanding his expressive resources beyond all recognition, while remaining true to the serial principles espoused in his earliest works. The rigorously constructed, large (40-minute) String Quartet 'In Space' attempts nothing less than an encyclopædic summary of the potential of the quartet genre. Rhythmic drumming effects and noise textures in the lively scherzo coexist with Brucknerian solemnity (and an actual, extended, Bruckner quotation) in the stately slow movement, alongside spatial effects and extended playing techniques throughout the work, the whole based on permutations of the tetrachord according to strictly applied serial methods. The second quartet adds voices to the texture, in a fragmentary text that becomes part of the complex instrumental fabric, expressive of psychoanalytical principles. Extended techniques and noise sounds occur juxtaposed with obsessively repeated melodic fragments and repeating patterns, the texture increasing in complexity in the last movement, which theatrically 'works through' the memories and compulsive repetition of the previous movements. Surprisingly accessible music, aside from the (tiny) Stücke, which may be viewed as an examination of the artisan's tools, rather than as art works in their own right. Katarina Rasinski, Michael Hirsch (voices), Quatuor Diotima. SACD hybrid