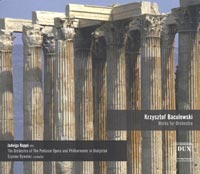 Description: The earliest work here, 1981's Ground marks a deliberate departure from the preoccupation with sonorous effects typical of the Polish avant garde of the previous generation towards a more romantic use of harmony and earlier structural devices. As the title suggests, the work is based on ostinato form, and is largely tonal. By the 1990s, Baculewski's music became more explicitly tonal; the dark-hued A Walking Shadow (the title from Shakespeare's 'Macbeth') is an effective neo-romantic tone poem, in memory of a friend, dramatic and powerfully evocative of tragedy and conflict. A decade later still, the cantata to texts by French poets frames the poems in music of great delicacy, with some dodecaphonic derivation of thematic material, and an emphasis on long vocal line and melodic eloquence. The half-hour Concerto was written in the 1980s and revised last year; the vocabulary is largely that of Ground, with a mysterious motif on flute appearing as a binding thread throughout the work, which unfolds slowly, becoming increasingly dramatic in later episodes. References to works of the past - Beethoven, and humorously, to Bartók's 'Concerto for Orchestra' suggest, as in Ground, a willingness to come to terms with pre-avant-garde forms of musical expression. French-Polish texts. Jadwiga Rappé (alto), Orchestra of the Podlasie Opera and Philharmonic in Bialystok; Szymon Bywalec.