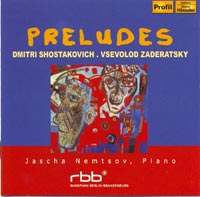 Description: We introduced you to Zaderatsky (the most consistently politically suppressed composer anyone can think of) last month on a disc of songs from this label. Although no one bought a single copy of this unique and fascinating music, possibly because of the fact that the most poisonous instrument (in terms of sales potential) was involved - the human voice - we try again, offering this recording of his 1934 Preludes. Unlike the set by Shostakovich which is only one year older, Zaderatsky's are not infused with sarcasm, irony or wit; he inhabits the 19th century European tradition and his preludes are often hommages of a kind to various predecessors although the final one (in D minor and the longest of the set) could have been one of the machine- or factory-pieces written by Mosolov, who was a friend of Zaderatsky. Jascha Nemtsov (piano).