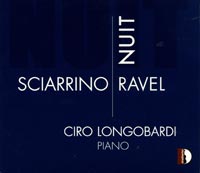 Description: De la nuit (1971) is the earliest of Sciarrino's Ravel-inspired nocturnes, presenting shards or fragments of very Ravelian sonority and harmony kaleidoscopically, with the effect of rapidly intercutting between different passages of authentic Ravel, as though subjected to a kind of 'cut-up' technique. The other nocturnes, from about 3 decades later, take this process much further; here the suggestions of Ravel still present are very fragmentary indeed. The musical material is presented in hallucinatory detail, as in dreams; the most subtle sounds of which the piano is capable are examined obsessively, bathed in shadowy resonance. Much of the material consists of small, ambiguous gestures or dens, often gentle, clusters - often bathed in the glow of precisely controlled resonance of sympathetic chords and clusters caught in pedal 3. As usual, Sciarrino suggests a new approach to musical attention, the interaction between what is actually heard and the listener's state of mind. Ciro Longobardi (piano).