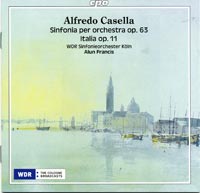 Description: Although, the youthful and exuberant Italia (1909) which makes use of several evocative Sicilian and Neapolitan popular songs and uses the evergreen Funiculi-Funiculà as the main ingredient for its grand peroration, has appeared once on CD (12 years ago on Arts), the symphony hasn't. Along with his Concerto for Orchestra (op. 61), this is Casella's supreme achievement, a full-scale, four-movement work of almost 45 minutes which is pure symphony: built entirely on interelated themes which appear in all four movements with the first movement's main theme coming back in the finale. Casella's handling of the large orchestra is consistently magisterial and we are swept along on a tide of attractive themes and colorful instrumentation in a mature style which has synthesized all of the previous Impressionist and Romantic influences of his more youthful works into a compelling, satisfying personal voice. WDR Sinfonieorchester Köln; Alun Francis.