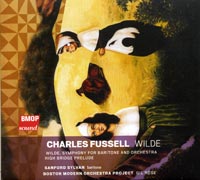 Description: High Bridge is a musical portrait of tragic poet Hart Crane, and appropriately enough the music is mercurial and self-contradictory, rapidly changing mood from abrasive to tenderly lyrical to violent to fragile in short measure. In both this and the more extended portrait of Wilde, Fussell's idiom remains thoroughly tonal. Wild' is based on the poet's correspondence with Alfred Douglas, depicting his life in London in the first movement, his tragic post-imprisonment wanderings in Europe in the orchestral episode that forms the second movement, and his death in Paris (the final moment depicted by a detached and inexpressive 12-tone chord, static amid the surrounding turmoil; the culmination of an intensely moving quasi-operatic soliloquy) in the desolate third movement. Both of these ultimately unfulfilled and tormented creative characters are sympathetically depicted in music that portrays their essential humanity in the face of circumstances that their unique psychology never equipped them fully to comprehend or overcome. Texts included. Sanford Sylvan (baritone), Boston Modern Orchestra Project; Gil Rose.