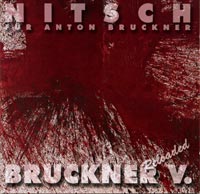 Description: Nitsch is notorious as the 'action artist' whose controversial performance artworks from the 1960s onward have included the use of blood, dismembered animals and so on. His explorations of multiple media include music, and his reverence for Bruckner as a composer whose works symbolize the expression of a multifaceted cosmic soul of some kind seems entirely genuine and sincere. His organ piece is a good deal less controversial than many of his performances; it consists of a slowly evolving succession of unrelated mostly rather dissonant chords which are allowed ample time to resonate impressively in the acoustics of the Basilica of the St Florian Abbey. There is a sense of the composer trying out combinations of sonorities and intervals in a quest for some transfiguring combination, like a latter-day Scriabin without the formal technique; the piece has a loose, improvised feel, undeniably impressive as any exploration of the sonorous potential of a large pipe-organ is bound to be. The Symphony gets Marthé's 'Reloaded' treatment here; in the absence of alternative editions or the necessity of any form of completion, his embellishments are restricted to some re-orchestration (somewhat eyebrow-raising in places if you know the piece well, but not obtrusively out of character) and unfamiliar tempi. 2 CDs. Hermann Nitsch (organ of Stiftsbasilika St. Florian), European Philharmonic Orchestra; Peter Jan Marthé.