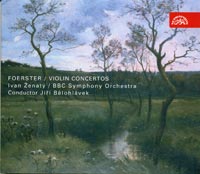 Description: Oddly, both these concertos from 1910 and 1926 were associated thematically and philosophically with the 1917 opera The Unvanquished. Both are a little over half and hour long, in three movements with a much longer first movement than the others and both have a solo part which leads, as it were, the orchestra. The music is predominantly flowing, without extremes of tempo, cantabile in character, prone to much examination and variation of lovely motifs. The violinist seems to muse thoughtfully at times, sing beautiful but relatively chaste songs at others; the second in particular, with the haunting main theme returning in the finale, is rather like a massive tone-poem with solo violin. More melodic and more instantly accessible than the symphonies, this is still music of great character which repays frequent listening. Ivan Zenaty (violin), BBC Symphony Orchestra; Jirí Belohlávek.